Here’s a brief summary of the afternoon’s flying, accompanied by some photos of those pilots and planes who made it down to Chouet.

For various reasons, our other planned events hadn’t been held in July or early August, so it was decided to just have an afternoon flying and chatting. The idea was to drag something out of the shed/attic that hadn’t been flown for a while, for whatever reason, and to just have a bit of fun in the company of other modellers.

The afternoon proved quite popular with about 15 or so members turning up to either fly or chat the afternoon away. It was also great to see a former member – Brian Lempriere, whose poor health unfortunately doesn’t allow him to actively participate anymore, but thanks to Shane B and Martyn D Brian he was able driven up onto site where he was able to sit and watch the afternoon’s activities.

Hopefully the photos will give the viewer a taste of the type of models flown that day, and it must be noted that the ‘Most senior’ pilot of the day was Brian Reynolds, flying an own design electric twin; the oldest aircraft flying was a ‘G-Man’ canard flown by Brian’s son – Paul;this aircraft was gauged to be about 30 years old and yet still flies like it did the day it first flew.

A great afternoon, and huge thanks to all who turned up to fly or catch up with old friends 🙂 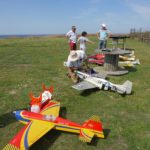 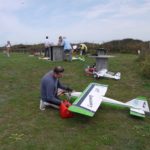 Shane B about to start his engine on his ‘Guernsey Girl’ 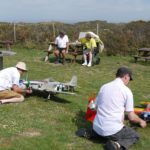 Chris W’s Mustang about to get started, Mike C ‘tweaks’ his model ready for flight 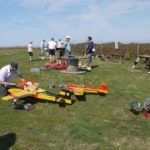 Part of the flightline showing a good assortment of models 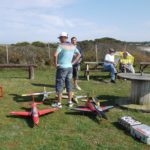 Dave W with his jet ‘squadron’ 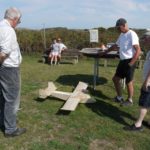 Brian’s model attracting quite a lot of interest 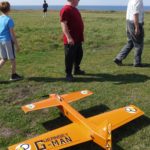 An ‘Oldy but Goody’ this canard 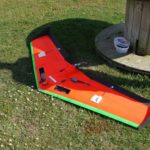 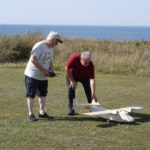 ‘Most Senior’ pilot – Brian Reynolds, ably assisted by son Paul, just about to ‘Maiden’ his own design electric twin 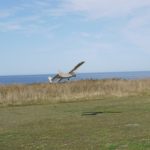 … and she’s away after a very short run!! 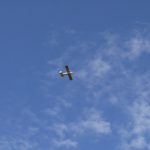 Looks great against the blue sky, and flies really well. 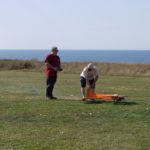 Paul’s turn to fly, ably assisted this time by his dad – Brian. This G-Man is about 30 years old, but still flies beautifully. 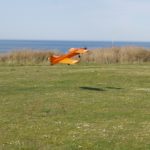 No messing about, she’s away into the wide blue yonder.